Strategies for Keeping Your Packages and Dependencies Updated

Modern app development is defined, in part, by a vast array of frameworks and libraries one can work with. The proliferation of npm packages and dependencies can make one dizzy. In any given app, you may find hundreds of dependencies that are critical to the application. It is humbling to see dependencies now take up a larger footprint than the app itself. As developers rely on more sophisticated dependencies, it’s inevitable to see packages get out of control.

So what can you do to make sure corrupt dependencies don’t creep up at the worst possible time? The deployment pipeline is just as critical as the code you author yourself. There must be a way to ensure safe and sound changes from the local dev machine all the way up to prod.

Below are four strategies I have found useful in enterprise software for maintaining dependencies.

Create your own private repo

You can create a private package repo that can live inside a corporate network. This adds a nice layer of protection against arbitrary dependency upgrades. The npm package ecosystem is one where dependencies may have one or more sub-dependencies. So anytime you bring in the latest packages, you run the risk of upgrades in a production server.

A good approach is to build a rock-solid pipeline that is consistent, from the local dev machine all the way up to prod. This shields you from surprises as you promote code changes up through production. The idea here is to test your changes using the exact same code and dependencies that will run for customers.

Using a private repo will help you avoid broken builds and even changes in behavior as you promote changes up to prod. Think of your dependencies as a critical part of the whole solution you deliver to customers. One unfortunate consequence of not having a private repo, for example, can be the left-pad and npm fiasco that broke many builds for people.

The only downside is having to specify which packages and versions will be included in the private repo. Your organization should give developers a way to add and update packages as they see fit. Consider making the process as clear as possible to avoid confusion and ad hoc programming around dependencies.

Computers are good at doing a specific job again and again but are not good at reading your mind. A better approach is to be as precise as possible and leave no room for guesswork.

For dependencies within dependencies, a good solution is to use the package-lock.json file. Consider using this locking solution for getting identical and consistent dependency trees. This file will describe the exact chain of dependencies which makes package installations through npm install portable and reproducible. You can commit this file into source control to get consistency across local dev machines and deployment pipelines.

If you are authoring an npm package, you may also use the npm-shrinkwrap.json file to lock down dependencies. Unlike the previous package-lock.json file, this file will be part of a published package. To create this file, use the npm shrinkwrap command that comes with npm. Like any other dependency locking file, feel free to commit this into source control.

The npm package system has a nice clean way to lock down dependencies, so it’s to your benefit to use it.

Watch out for security vulnerabilities

One reason you must upgrade dependencies is to tackle security vulnerabilities. Keep in mind that the more dependencies you use, the larger the attack surface. To get a list of dependencies npm ls --prod gets a list of packages that will run in prod. You may also add --long to get a description of each dependency.

For example, to get a long list of prod dependencies: 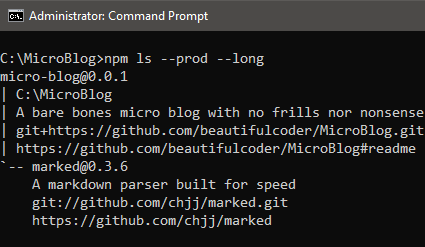 You may find that you don’t use all dependencies. Your app may be carrying around extra packages that only serve to increase the attack surface. Consider carefully going through each dependency and shedding the extra baggage.

There are tools to check for unused dependencies such as depcheck. This tool goes through the package.json file and flags any unused dependency that is not part of an import in the code. The command can be tweaked which makes it easy to automate as part of the deployment pipeline. One idea is to flag unused dependencies with an error and fail the build.

As of April 2018, the Node Security Platform is part of npm, Inc. This shows there is a commitment to security from the npm registry.

As of npm version 6.x, you can find the command npm audit. This uses the Node Security Platform which has a database of JavaScript vulnerabilities. This tool runs a security audit and flags any vulnerable dependencies.

The idea is to pick a good way to keep up to date with the latest updates on security. JavaScript has an ecosystem that is vibrant and very dynamic so keeping dependencies secure must be a high priority.

In packaged software, semantic versioning is a powerful tool. Semantic Versioning, or semver for short, gives you a good guide on how upgrades might impact the software. If you are looking to upgrade or author a package, keep this versioning system in mind which communicates changes.

You may notice that all npm packages come with three numbers separated by a dot. For example, 1.0.1. On the surface, it may look like an arbitrary number tied to an internal build system. But, in most npm packages this is a form of communicating changes.

Semver is the golden standard when authoring npm packages. Be sure to use this way of communicating package changes to the JavaScript community.

To summarize, managing dependencies comes down to four important points:

Change is hard and at times undesirable. Programming is not about clumsy or random changes but one of  deliberate precision. One way to look at dependencies is to wield them with intent because these too are critical to the app. This leads you to a better path of building high-quality software.

All changes in any environment, whether it be in prod or another dev machine, must have consistent behavior. This helps in software that remains the exact same and is reproducible for testing. Your npm package strategy must make software that is immutable a high priority.

Camilo Reyes is a husband, father, and software engineer living in Houston, Texas who is passionate about enterprise grade solutions and cybering all the things.

How to Build a Knowledge Base Powered by React and ButterCMS