In this article, we will address two of the most common mobile app development frameworks—Ionic and React Native—to help you consider the primary distinctions between these two frameworks as well as their main features and disadvantages. We'll also take a look at how you can quickly implement a headless CMS for Ionic or React Native.

Before we get into the Ionic vs React Native debate, let's take a quick look at the differences between native and hybrid (cross-platform) apps.

There are several ways to develop a mobile application as an end product in this modern technological era. The foremost approach is to develop it natively, using the native language of each platform. Native applications are developed for a particular platform in a particular programming language. As an example, when we develop an iOS-specific application using the Objective-C language or an Android-specific application using Java, then the app is called a native app. The use of native code results in better performance, but the only disadvantage is the requirement of multiple teams to manage the mobile application. 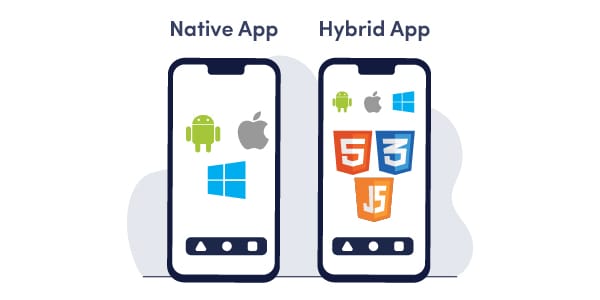 In contrast, hybrid apps are software applications that are created using web technology such as HTML, CSS, and JavaScript. Capacitor/Cordova platforms are used to have a localized experience and navigate native functionality in Android, iOS, or some other app. Cross-platform applications focus on common web resources such as HTML, CSS, and JavaScript to provide native interfaces while using native functionality. The hybrid approach has the upper hand in improving app development efficiency by using a single project on all platforms and providing UX compatibility across networks.

React Native is based on a dynamic runtime approach where the applications are programmed in JavaScript. With the support of a device (mobile) JavaScript API, the JavaScript code is communicated to both Android and iOS platforms, which communicate the requisite API calls and operations to the native device API. Both APIs are linked via a tunnel, and this is why React Native mobile applications often function as if they were developed natively.

In contrast, Ionic applications are based on WebView Wrapper and Capacitor, which use a WebView component or a Chrome window interface. The WebView component renders an HTML/ CSS UI using an HTML layout engine. Capacitor communicates between the WebView framework and the Native platform using a native JavaScript tunnel. This methodology enables the platform to gain access to Native APIs and application functionality such as the webcam used by WebView. 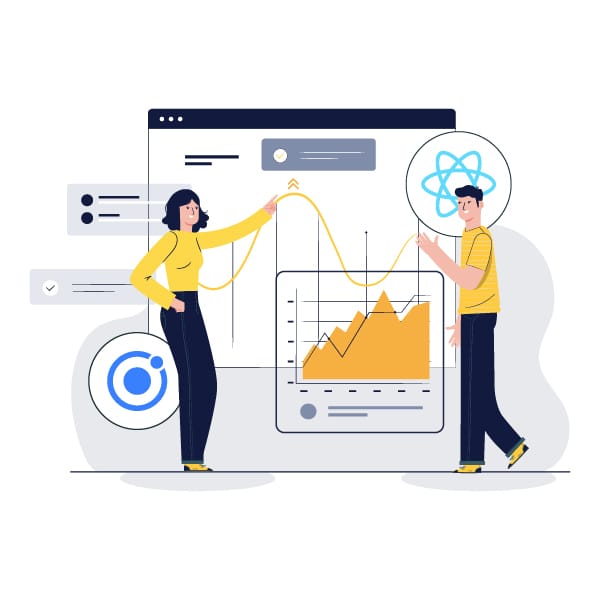 React Native is penned in JavaScript and is based on the popular JavaScript framework React. Instead of HTML, the UI components are written in JSX. JSX appears to be any other prototype scripting language, but it has all the capabilities of JavaScript. React Native conforms to mobile devices’ native behavior and requirements, resulting in a smooth interface. The benefit, in this case, is that it focuses entirely on user interface design with the use of native UI elements. One of the main features of React Native is that a developer can easily switch to native programming if he is unable to perform any modification to the JavaScript code of applications. Within these circumstances, a developer can create certain components in React Native and others in core native components. However, you can achieve the same degree of actual native platform efficiency.

When it comes to Ionic development, it leverages the strength of traditional mobile platforms to build multi-feature, cross-platform applications with minimal programming. Ionic is developed on top of the Angular framework, and if you are already acquainted with Angular, it would be a good idea to begin with Ionic for mobile application development. Also, Ionic comes with a slew of pre-built components and modules that enable production to be simpler, quicker, and gentler. The Ionic framework has a profound significance to include UI/UX elements that do not exist within the web application development environment. Ionic applications can be developed with frameworks such as Angular, Vue.JS, or React JS.  In comparison with React Native, Ionic's engineering stack is even more scalable. The Ionic architecture also includes a command-line interface (CLI) platform for designing, developing, and deploying Ionic applications.

If you've previously worked with the React JS library, React Native is simple to learn and implement. Definitions and concepts are equivalent in React Native and React JS, and the program is written entirely in React. They differ in one way: React uses HTML elements like <span>, <label>, <h1>, and so on, whereas React Native uses wrapper elements based on native iOS and Android elements like <CardView>. However, if we talk about newcomers who are unfamiliar with React, to learn React Native, you must first gain basic knowledge of JavaScript and React. You should also start dreaming like an application developer because you will be creating mobile applications rather than web applications. For someone unfamiliar with React, the learning curve might be deemed too complicated. 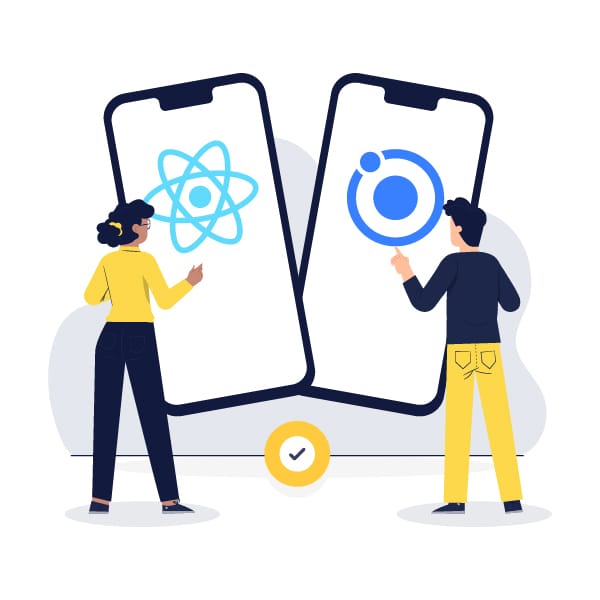 In the above comparison, we have already discussed that Ionic's technology stack is adaptable. Because of this flexible nature of Ionic, a developer can utilize their preferred web application framework such as Angular, React, Vue.JS, or some other new JavaScript framework. Developers who employ Ionic as an application development platform can use the framework with which they are already acquainted and have experience creating applications. The learning curve is also not as difficult as in React Native. Ionic enables you to create online apps which can be used for smartphone devices. In contrast to React Native's native methodology, this hybrid approach is distinctive. This is simpler for developers to understand.

While developing a mobile application, if you want the highest performance, create native iOS and Android apps independently. This is because native programming allows us to develop explicitly for native functionality. Native iOS and Android components contribute to improved efficiency with direct interaction and no abstraction layer. As a result, React Native and Ionic do not correspond to their native performance. Let us now debate the performance of those two frameworks.

Both tools can build fast apps. It’s really up to the developer to identify the best tool for their specific application. React Native is fundamentally a JavaScript-based framework for developing native applications. Also, it has the identical appearance and feel of a native app and employs the same key components as native apps. Unlike React Native, Ionic takes a hybrid methodology for mobile app creation. It causes many performance issues because it does not create native applications and, as a result, makes several callbacks to native libraries which could result in latency. Ionic includes the Capacitor plugin to use native functionality.

Both Capacitor and React Native can consume the same iOS or Android native package and expose it via Javascript.

According to the State of JS's 2020 JavaScript summary, React Native and Capacitor (Ionic’s native runtime) had very similar satisfaction within the marketplace with 82% and 84% satisfaction, respectively. React Native had higher awareness at that time, however, Ionic has been gaining attention as more people learn about its capabilities and advantages.

React Native has a large range of extensions. React Native also has a large group that is very useful in finding crucial facts, updates, and answers to your problems. A Cordova plugin is now available that allows you to use several matured extensions from other groups. For Ionic, a well-established and professional group will help you solve your problems. Many plugins are used by Capacitor to obtain native functions.

Then import the ButterCMS client in your TS file:

Add the ButterCMS NPM module to your existing React native project as a dependency.

Then add the API token to butter-client.js file and import the ButterCMS client in your JS/TS file:

You can then test the ButterCMS client by, for example, fetching all of your blogs:

Based on this elaborate analysis and comparison of the two frameworks, we can conclude that the choice of mobile development framework is highly subjective to the features that you would need and the skill set you have available. Both React Native and Ionic provide similar features along with great community support.

In my opinion, React Native supports native functionalities better. Ionic, on the other hand, is more mature and has more resources on the web to support your development. With a CMS like ButterCMS and its powerful SDKs, you can create a simple and efficient development process with either one of these popular frameworks.

Sign up to receive tutorials on Ionic and React Native.
Abhishek Kothari

How to Add a Blog to Your Ionic App With ButterCMS

Next.js vs. React: Which Should You Choose For Your Next Project?